“…the phrase “earning power” must imply a fairly confident expectation of certain future results. It is not sufficient to know what the past earnings have averaged, or even that they disclose a definite line of growth or decline.” ―Graham & Dodd, Security Analysis (6th Ed.)

A few thoughts from Graham & Dodd and Marty Whitman about how to think about earnings and how it may differ from earning power.

In The Aggressive Conservative Investor Marty Whitman discusses the importance and implications of distinguishing between earnings and earning power:

Graham & Dodd also put down their thoughts about earning power, for instance in Security Analysis (quotation below from the sixth edition) in which they wrote:

Intrinsic Value vs. Price. From the foregoing examples it will be seen that the work of the securities analyst is not without concrete results of considerable practical value, and that it is applicable to a wide variety of situations. In all of these instances he appears to be concerned with the intrinsic value of the security and more particularly with the discovery of discrepancies between the intrinsic value and the market price. We must recognize, however, that intrinsic value is an elusive concept. In general terms it is understood to be that value which is justified by the facts, e.g., the assets, earnings, dividends, definite prospects, as distinct, let us say, from market quotations established by artificial manipulation or distorted by psychological excesses. But it is a great mistake to imagine that intrinsic value is as definite and as determinable as is the market price. Some time ago intrinsic value (in the case of a common stock) was thought to be about the same thing as “book value,” i.e., it was equal to the net assets of the business, fairly priced. This view of intrinsic value was quite definite, but it proved almost worthless as a practical matter because neither the average earnings nor the average market price evinced any tendency to be governed by the book value.

Intrinsic Value and “Earning Power.” Hence this idea was superseded by a newer view, viz., that the intrinsic value of a business was determined by its earning power. But the phrase “earning power” must imply a fairly confident expectation of certain future results. It is not sufficient to know what the past earnings have averaged, or even that they disclose a definite line of growth or decline. There must be plausible grounds for believing that this average or this trend is a dependable guide to the future. Experience has shown only too forcibly that in many instances this is far from true. This means that the concept of “earning power,” expressed as a definite figure, and the derived concept of intrinsic value, as something equally definite and ascertainable, cannot be safely accepted as a general premise of security analysis.

Example: To make this reasoning clearer, let us consider a concrete and typical example. What would we mean by the intrinsic value of J. I. Case Company common, as analyzed, say, early in 1933? The market price was $30; the asset value per share was $176; no dividend was being paid; the average earnings for ten years had been $9.50 per share; the results for 1932 had shown a deficit of $17 per share. If we followed a customary method of appraisal, we might take the average earnings per share of common for ten years, multiply this average by ten, and arrive at an intrinsic value of $95. But let us examine the individual figures which make up this ten-year average. They are as shown in the table on page 66. The average of $9.50 is obviously nothing more than an arithmetical resultant from ten unrelated figures. It can hardly be urged that this average is in any way representative of typical conditions in the past or representative of what may be expected in the future. Hence any figure of “real” or intrinsic value derived from this average must be characterized as equally accidental or artificial.

“My intellectual odyssey ended, however, when I met Ben and Dave, first through their writings and then in person. They laid out a roadmap for investing that I have now been following for 57 years. There’s been no reason to look for another.”—Warren Buffett

Warren Buffett’s Forward to the Sixth Edition of Security Analysis

“There are four books in my overflowing library that I particularly treasure, each of them written more than 50 years ago. All, though, would still be of enormous value to me if I were to read them today for the first time; their wisdom endures though their pages fade.

Two of those books are first editions of The Wealth of Nations (1776), by Adam Smith, and The Intelligent Investor (1949), by Benjamin Graham. A third is an original copy of the book you hold in your hands, Graham and Dodd’s Security Analysis. I studied from Security Analysis while I was at Columbia University in 1950 and 1951, when I had the extraordinary good luck to have Ben Graham and Dave Dodd as teachers. Together, the book and the men changed my life.

On the utilitarian side, what I learned then became the bedrock upon which all of my investment and business decisions have been built. Prior to meeting Ben and Dave, I had long been fascinated by the stock market. Before I bought my first stock at age 11—it took me until then to accumulate the $115 required for the purchase—I had read every book in the Omaha Public Library having to do with the stock market. I found many of them fascinating and all interesting. But none were really useful. My intellectual odyssey ended, however, when I met Ben and Dave, first through their writings and then in person. They laid out a roadmap for investing that I have now been following for 57 years. There’s been no reason to look for another. 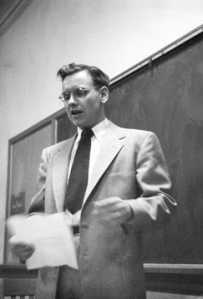 Beyond the ideas Ben and Dave gave me, they showered me with friendship, encouragement, and trust. They cared not a whit for reciprocation—toward a young student, they simply wanted to extend a one-way street of helpfulness. In the end, that’s probably what I admire most about the two men. It was ordained at birth that they would be brilliant; they elected to be generous and kind.

Misanthropes would have been puzzled by their behavior. Ben and Dave instructed literally thousands of potential competitors, young fellows like me who would buy bargain stocks or engage in arbitrage transactions, directly competing with the Graham-Newman Corporation, which was Ben’s investment company. Moreover, Ben and Dave would use current investing examples in the classroom and in their writings, in effect doing our work for us. The way they behaved made as deep an impression on me—and many of my classmates—as did their ideas. We were being taught not only how to invest wisely; we were also being taught how to live wisely.

The copy of Security Analysis that I keep in my library and that I used at Columbia is the 1940 edition. I’ve read it, I’m sure, at least four times, and obviously it is special.

But let’s get to the fourth book I mentioned, which is even more precious. In 2000, Barbara Dodd Anderson, Dave’s only child, gave me her father’s copy of the 1934 edition of Security Analysis, inscribed with hundreds of marginal notes. These were inked in by Dave as he prepared for publication of the 1940 revised edition. No gift has meant more to me.”

Disclosure: I wrote this article myself, and it expresses my own opinions. I am not receiving compensation for it. I have no business relationship with any company or individual mentioned in this article. I have no positions in any stocks mentioned, and no plans to initiate any positions within the next 72 hours. This article is informational and is in my own personal opinion. Always do your own due diligence and contact a financial professional before executing any trades or investments.

What constitutes a good business?

Let’s turn to Seth Klarman for some advice.

In other words, a good business is one that enjoys the following characteristics:

Keep these six characteristics in mind as a mini-checklist when thinking about and analyzing a certain business, trying to decide if the business in question meets these requirements for what constitutes a good business.