“We’re generally overconfident in our opinions and our impressions and judgments.”

In his Partnership Letters Warren Buffett discusses four different investment methods used by him in order to best act in accordance with his investment principles. The methods are: (1) Generals-Private Owner, (2) Generals-Relatively Undervalued, (3) Workouts, and (4) Controls.

In Buffett’s Ground Rules, written by Jeremy Miller, the author provides the following checklist as a tool for evaluating a potential investment in a General, i.e., both Generals-Private Owner and Generals-Relatively Undervalued.

Here is a checklist for evaluating a potential investment in a General: (1) Orient: What tools or special knowledge is required to understand the situation? Do I have them? (2) Analyze: What are the economics inherent to the business and the industry? How do they relate to my long-term expectations for earnings and cash flows? (3) Invert: What are the likely ways I’ll be wrong? If I’m wrong, how much can I lose? (4) What is the current intrinsic value of the business? How fast is it growing or shrinking? And finally, (5) Compare: does the discount to intrinsic value, properly weighted for both the downside risk and upside reward, compare favorably to all the other options available to me?

I enjoy reading Buffett’s Ground Rules, and one third into it I can highly recommend it. In this book the author provides a compilation of the old Buffett Partnership letters, and discusses different investment principles, methods, and digs into some of the investments made by Buffett during the 1956-1969 era.

The author then goes on to provide some insight about what to do when you’re not able to clear each paragraph in the checklist.

If you find yourself unable to make it all the way through the checklist, then write down in a single paragraph the metrics of the investment. If you get caught up along the way, either do more work or simply forget the idea as “too hard” and move on to something else.

“TAM is an area where overconfidence and optimism are rife. We have provided some analytical approaches to check these biases and to come up with a reasonable assessment of whether the market’s expectations are reasonable.” —Mauboussin & Callahan, Total Addressable Market – Methods to Estimate a Company’s Potential Sales

The concept of total addressable market (TTM) is the subject of Mauboussin and Callahan’s most recent paper.

“The ability to calibrate the total addressable market (TAM) is a major part of anticipating value creation. Since 1960, about one-third of the value of the S&P 500 Index has been attributable to the anticipated payoff from future investment. Assessing value creation requires understanding how much a company can invest and the returns those investments will earn.

We define TAM as the revenue a company would realize if it had 100 percent share of a market it could serve while creating shareholder value. TAM is a concept that executives and investors use frequently, but that few define properly or thoughtfully. You should recognize up front that TAM is not about how large a firm can grow to be but rather how much it can expand while adding value”

Click on the image below to read the paper. 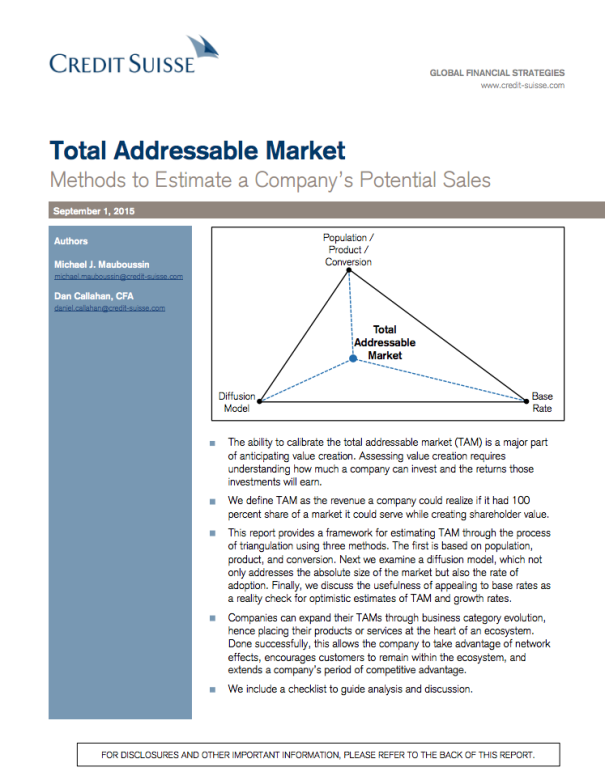 Included in this paper is an checklist addressing certain important questions to consider when performing an analysis of TAM.

TAM and the Bass Model

See here for a collection of links to other Mauboussin papers.

Disclosure: I wrote this article myself, and it expresses my own opinions. I am not receiving compensation for it. I have no business relationship with any company or individual mentioned in this article. I have no positions in any stocks mentioned.

“…the number of questions is not so much the important, but it’s just that the quality of the questions and then come to having that analytical judgement on which questions are important for a particular company.” —Michael Shearn

In this post you find the most recent interview from 5GQ with Michael Shearn, the author of The Investment Checklist: The Art of In-Depth Research.

I have transcribed the first two questions, question number one beeing about what part in a 10k to look at and the second question about how many checklist items there are in Michael’s own investment checklist.

For questions number three to five I have transcribed only the question, so you can see what they’re about and go to the video interview to hear Michael’s answers to these questions.

The remaining questions (not transcribed in this post) are:

From having looked at the first two questions, let’s turn to the last one outside of the five ordinarily questions. 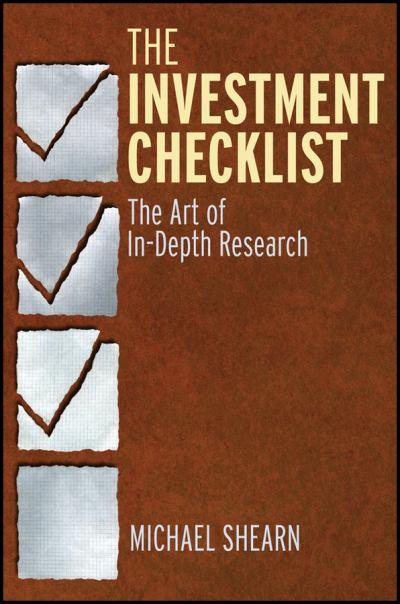 “…our focus here is on how companies spend money.

The problem is that many CEOs, while almost universally well intentioned, don’t know how to allocate capital effectively. Warren Buffett, chairman and CEO of Berkshire Hathaway, describes this reality in his 1987 letter to shareholders. He discusses the point of why it is beneficial for Berkshire Hathaway’s corporate office to allocate the capital of the companies it controls. Buffett is worth quoting at length:

‘This point can be important because the heads of many companies are not skilled in capital allocation. Their inadequacy is not surprising. Most bosses rise to the top because they have excelled in an area such as marketing, production, engineering, administration or, sometimes, institutional politics.

Once they become CEOs, they face new responsibilities. They now must make capital allocation decisions, a critical job that they may have never tackled and that is not easily mastered. To stretch the point, it’s as if the final step for a highly-talented musician was not to perform at Carnegie Hall but, instead, to be named Chairman of the Federal Reserve.

The lack of skill that many CEOs have at capital allocation is no small matter: After ten years on the job, a CEO whose company annually retains earnings equal to 10% of net worth will have been responsible for the deployment of more than 60% of all the capital at work in the business.

CEOs who recognize their lack of capital-allocation skills (which not all do) will often try to compensate by turning to their staffs, management consultants, or investment bankers. Charlie [Munger] and I have frequently observed the consequences of such “help.” On balance, we feel it is more likely to accentuate the capital-allocation problem than to solve it.

In the end, plenty of unintelligent capital allocation takes place in corporate America. (That’s why you hear so much about “restructuring.”)'”

In the end of the paper the authors share a Checklist for Assessing Capital Allocation Skills. This checklist is reproduced below.

In the earlier post The Great Man Behind Teledyne: Henry Singleton and the recording The Manual of Ideas on Business Leader Henry Singleton, Founder of Teledyne, there is a part starting at 1:12:31 that describes the standards that Singleton had for deciding whether or not a company was a good acquisition candidate for his Teledyne.

The questions that Teledyne asked when analyzing and considering potential acquisitions were:

See here for a review of the book Distant Force A Memoir of the Teledyne Corporation and the Man Who Created It.

This book is also mentioned in the article What Would Value Investing 101 Look Like? written by Geoff Gannon at GuruFocus.com.

Disclosure: I wrote this article myself, and it expresses my own opinions. I am not receiving compensation for it. I have no business relationship with any company or individual mentioned in this article. This article is informational and is in my own personal opinion.

What constitutes a good business?

Let’s turn to Seth Klarman for some advice.

In other words, a good business is one that enjoys the following characteristics:

Keep these six characteristics in mind as a mini-checklist when thinking about and analyzing a certain business, trying to decide if the business in question meets these requirements for what constitutes a good business.